Clinton, herself being a cold-blooded reptilian overlord surgically implanted into a human-clone body and sent through trans-dimensional space to pave the way for colonization and enslavement of the earth, has long been a favorite among her fellow trans-dimensional lizard people, and was considered a shoo-in for the democratic nomination. But 2016 is shaping up to be a very different campaign season, as the beleaguered politician loses support from even her most ardent long-time supporters.

“Sure, she says she’s looking out for our best interests, but where’s the proof?” says Xandran Ka’zinjan, A lizard-woman of the Kob’an tribe, “I remember when she got her man-slave Clinton into office, she promised us that in four years we’d all be feasting on the tender flesh of human infants. I don’t have to tell you that didn’t happen. Infant flesh is still far too expensive for all but the most wealthy lizard-folk, despite her talk of a subsidy program. Talk is cheap. I guess we’re all just sick of empty campaign promises.” 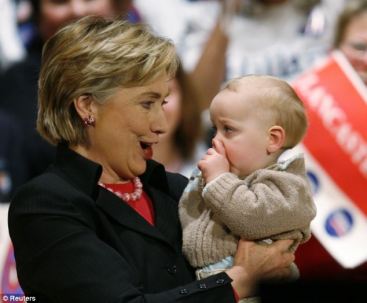 A photographer captures the look of horror on this infant’s face, seconds before Clinton dislocates her reptilian jaw and swallows the baby whole.

As the primary race heats up, the Clinton campaign is working overtime to shore up support among the demographic she’s long taken for granted. Earlier this week she embarked on a hastily scheduled speaking tour of the hidden underground lizard warrens that litter the united states. There, amongst the screams of human meat-slaves dying in agony as lizard-babies consume them from within, Clinton even went so far as to remove her human mask, displaying her green, scaly snout and her razor-sharp teeth as she promised members of the Lizard Infiltrator’s Caucus that she is still their best chance to keep their brutal dominance over the human race.

“I know it may look like I’ve grown soft, and accustomed to the filthy customs of this slave-race of warm-bloods,” Said Clinton, “But at the end of the day, I’m just like you. I like to take off my hideous, constricting human face to let my scales air out, drink a refreshing glass of sulfuric acid, and feast on some tender human infant flesh.” With a forced laugh and a smile that screamed desperation, Clinton continued, “And if I’m in the mood, then I’ll jam my pulsating ovipositor into my human meat-slave, know what I’m saying? I’m an everyday lizard, just like you.” 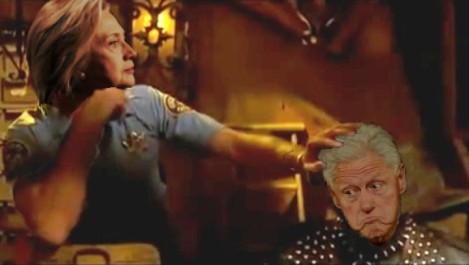 “Please vote for her,” says Former president and Meat-Slave Bill Clinton, “she gets angry if you don’t vote for her.”

“She’s lost touch with the everyday lizard.” Says one attendee. “Doesn’t she even realize that reptilians these days can’t afford baby flesh? Clinton is one of us, it’s true. But if she can’t be trusted to properly handle classified human documents, how can she be trusted to keep secrets about an ancient, far reaching conspiracy to enslave the human race? I just feel like she’s become too much of a beltway insider. And I really like what the warm-blood-filth Sanders has to say about healthcare reform.”

The Proboscis updates on Sundays. Unless it doesn’t.