WASHINGTON DC—In a press conference earlier today, Donald Trump signed an executive order to repeal the Magna Carta, the landmark document which ended the absolute power of the English monarchy, and which provides the foundation for modern democracy and parliamentary law. 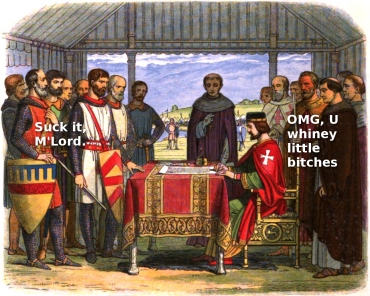 Actual words spoken at the signing of the Magna Carta.

The document, signed by King John of England in a field at Runnymede in 1215, was part of a peace brokered between the king and a group of rebel barons. The Magna Carta was the first legal document to curtail the powers of English kings, and declared for the first time that royalty was not outside the law. While its principles strongly influenced the US Constitution and Bill of Rights, the document itself has no current legal standing. It does not apply to US law in any way, shape or form. But this didn’t stop the president from demanding it be done away with.

The Proboscis updates on Sundays. Unless it doesn’t.